Last week, I went to a lovely tea tasting evening at Lee Rosy’s in Nottingham. It was very informative and opened my eyes to all the many varieties of tea out there! Jasmine tea (the worlds most expensive tea!) was particularly interesting to taste. Although I really enjoyed the tea tasting – I’m afraid I don’t think there’s any danger of me becoming a tea connoisseur any time soon – I still can’t tell the difference between tesco value tea bags and any others so I don’t think there’s much hope for me! 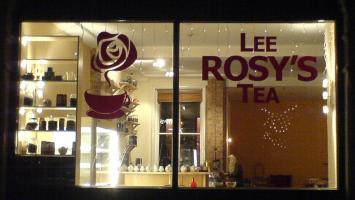 In case you’ve never been, Lee Rosy’s is located on Broad Street, opposite the Broadway Cinema. Its an independent cafe that specialises in the teas of the world and it has a very chilled out shabby-chic atmosphere inside.

As well as their great selection of teas, Lee Rosy’s also serve loads of other drinks too – I had a delicious chocolate milkshake which was £2.40. Yum! They had other milkshakes too such as caramel and strawberries and cream and I’ll hopefully be back to try more!

The only negative point about Lee Rosy’s for me was their cakes – they appear to all be bought in (not homemade – gasp!) and none of them looked particularly appetising to me – you know how you can just tell when a cake is homemade, tender-crumbed, unique and delicious. These were not. They buy in their cakes from The Cheesecake shop  – take a look at their carrot cake – its alarming grey and carrot-free looking!

But our £5 for the tea tasting included a piece of cake, so I got a piece of the chocolate rocky road/chocolate fudge cake anyway to take away (mine didn’t look anything like the picture and didn’t have any strawberries or marshmallows on).

It was okay – a bit stale, – certainly not homemade and it just wasn’t delicious enough for me to spend 450 calories (or however many!) eating all of it so it went in the bin. Overall, the lack of homemade cakes is the one negative point about Lee Rosy’s.

Things seem to be better with the savoury food though – although I didn’t eat while I was there (apart from my takeaway cake), I noticed that they do great value savoury options such as soup and pittas with prices starting around the £2.50 mark which is great for a fuss free light lunch or snack. There are lots of options for veggies and vegans too which is fab!

As well as tea and food, Lee Rosy’s also host events such as a film night, and knitting club and they also sometimes have small, intimate gigs there which I’m sure would be fantastic – Click here to see upcoming events at Lee Rosy’s on their website!

What do you think of Lee Rosy’s? Has anyone tried their selection of savoury food? What do other people think of the cheesecake shop also? I’ve had their cheesecakes and now their cakes and been very very disappointed by both- am I just a really harsh critic?! Let me know!